If you have any queries please use the contact form.

Castaways of the Kriegsmarine 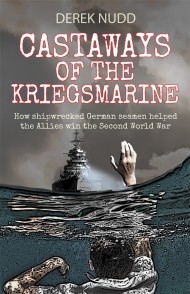 In January 1944 two hundred and fifty exhausted, disoriented survivors converged on two remote English country houses. They had lived through Nazi shipwrecks from North Africa to North Cape, from blockade runner to battleship.

There, waiting for them, was a highly tuned intelligence production line created to draw valuable information from their heads as quickly and painlessly as possible.

Few of the castaways disgorged at Latimer House and Wilton Park still believed in victory, a gift for their experienced, adaptable, patient interrogators.

The system had two secret weapons. Every word the captives said in their cells was overheard and, if interesting, recorded by covert listeners. And some prisoners had changed sides, thrown in their lot with their captors.

Read how it was done, how it tilted the balance of the sea war, and the human stories behind the machine.

I develop Helen Fry's important work on the Combined Services Detailed Interrogation Centres by looking at their processes and people at the peak of their efficiency. In particular, the book shines new light on the pace at which captives were brought into the system, the role of stool-pigeons, the classification of intelligence value and the part psychologists played in tracking German military morale and opinion.

Death! Betrayal! Sex! (if you look carefully) Claustrophobic clash of wills! And all true!

How much drama do you need?

Burton Cope, a veteran interrogator from the Great War, joined Bernard Trench's team in March 1940. No natural conformist himself he ended up as the face of authority to an eclectic mix of temporary officers ranging from convoy veterans with salt in their hair to journalists, engineers and an artist - who did not take easily to naval conventions. Read Castaways of the Kriegsmarine to find out more about this unconventional team and their extraordinary achievements.

Corrections and clarifications for the first printing

The following apply if you have a copy with a cover that looks like this. They have been corrected in the printing with the updated cover above:

P.36: Franz von Werra was not the only 'one who got away.' A less famous but perhaps even more influential escaper was Kurt Reich, Maschinenmaat (Mechanician 2nd Class) from U 63. He staged a daring break from the transport steamer taking him to Canada by jumping overboard in the St Lawrence Seaway and swimming to shore. It is also possible that Oberleutnant (Ing) Rottman of U 33 made it back, but I have not been able to confirm this.

P.64, 69: I imply that Julius Lunzer was the first Jewish naval interrogator. In fact Wilfred Samuel had that distinction. At the time of our narrative, however, Samuel was serving in Ottawa as liaison with the Royal Canadian Navy, and in charge of mail censorship for prisoners in both the US and Canada.

The Wrens in the photo have been provisionally identified as (from left to right) Jean Flower, Evelyn Barron, Esme Mackenzie (not Claudia Furneaux). The last is Gwendoline Neel-Wall. John Weatherby is not in the photo; his brother Dick is third from right in the back row. New information suggests that the photo was taken in 1943.

P.113: A reader has kindly pointed out that Korvettenkapitän Wirich von Gartzen (b.1909) survived the sinking, wrote a post-war book (Die Flottille: Aussergewöhnlicher Seekrieg deutscher Mittelmeer-Torpedoboote) on torpedo-boat operations and lived until 1993. The captives at CSDIC did not know this but assumed he had gone down with the ship.

P.158. The reference to 'von Rath' could use clarification. The 1938 assassination of Ernst vom (not von) Rath, a German diplomat in Paris, by a Jewish teenager provided the pretext for Kristallnacht, an orgiastic night of murder, destruction and arrest against Nazi Germany’s Jewish population.

P.202. The captain of Scharnhorst was erroneously called Hintz, not Hintze, in the original document. The name should have [sic] after to indicate this.